Time flies doesn’t it? Perhaps I said that last year when the first anniversary came to pass. I think that I might have and while I was initially on the fence about posting a two year reflection about the passing of Ronnie James Dio, when the day started out I decided that I should. Let’s face it. Ronnie James Dio became one of the most important figures in Heavy Metal music ever. Without question or controversy, he was the man, and one of the most visible champions of the genre that we have ever had in our corner. His death crushed many and he is missed every single day by his worldwide legions of fans. Since he passed away a whole lot of stuff has popped up in terms of releases or bands touring in his memory. We’ve found unreleased classic shows and limited edition vinyl releases along with special edition versions of some of his work with Rainbow, Elf and of course Dio. A Tribute To Dio band called “Dio Disciples” tours with Ripper Owens at the helm and now a new band that features members of Dio’s first solo touring band are working on unleashing their own thing and I am sure that we have not seen nothing yet. 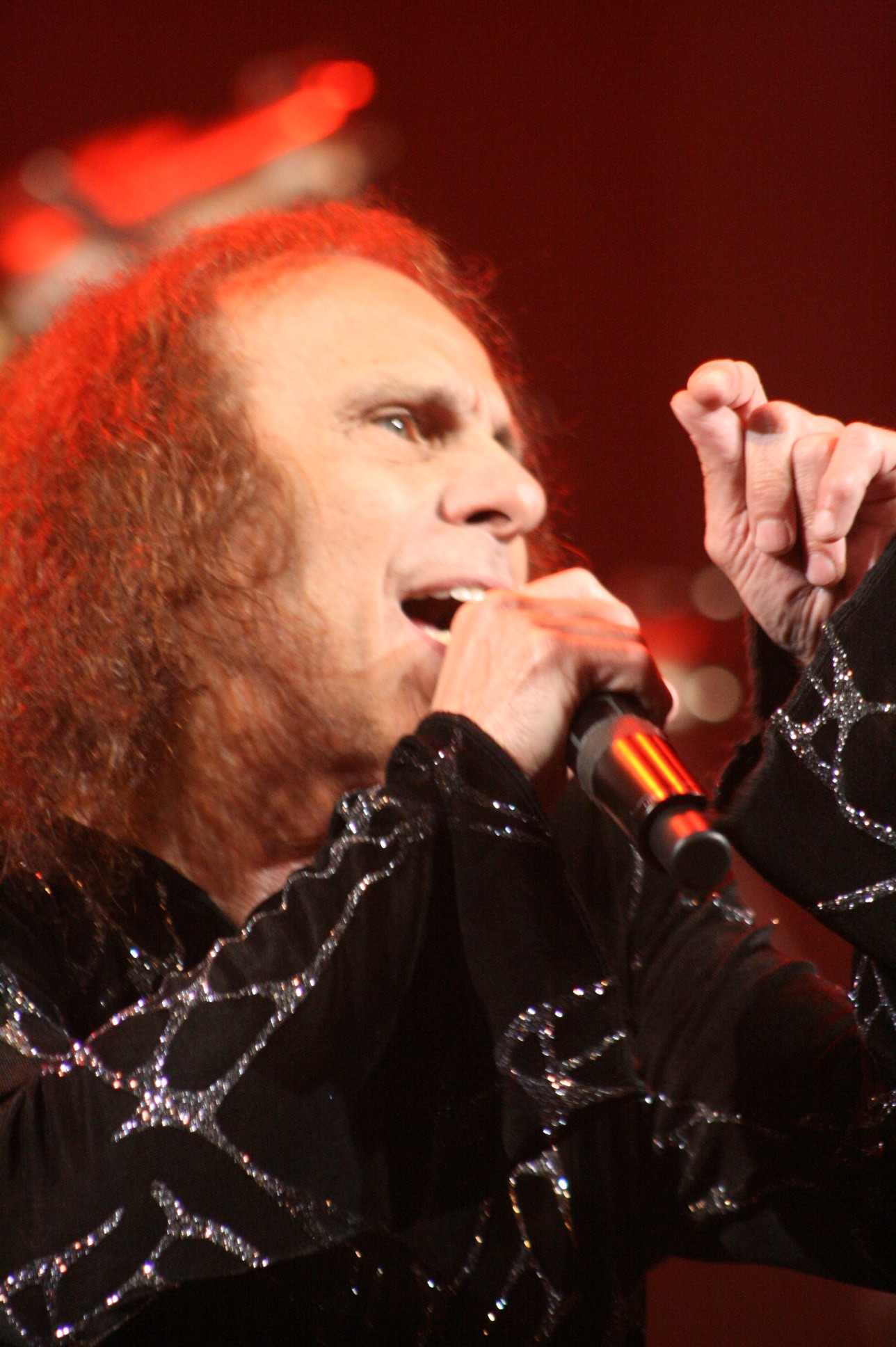 Since Ronnie’s death another interesting development was the proposed reunion of the original members of Black Sabbath but now that seems to be a questionable project since it no longer involves the founding Bill Ward. I know that Geezer and Tony didn’t want to continue on with Heaven And Hell without Ronnie at the helm, but I so wish they would have just opted to find someone who would do proper respect to the man and his memory and let these tunes be heard night after night in live concert instead of only being pulled out of the DVD cabinet every now and again. Still I am glad I own the catalog items that I have and I was so glad to have taken photos of him in concert a few times when the means allowed me to do so. Those are my memories. What are your own?

Clicking the photo above will take you to the original memorial blog posting that ran on PiercingMetal Musings the day that Ronnie passed away. I chose to present it to you in this manner as opposed to just making it a “sticky” on the top of the other posts. Please note that the comments have been closed on this particular posting but you can leave any thoughts you might have about Dio on the original memorial piece if you so desire. We welcome your own thoughts about his memory and his continuing influence upon the Heavy Metal scene. So many of us miss him still and wonder how the last two years in Metal might have been had he not been ill or at least been able to recover. Oh well. There is nothing we can do to change the outcome that we got, but let’s blast the Metal music a little bit louder today and never ever forget what Dio gave to us for so many decades of his life.

Note: Please know that the means to comment on this post have been turned off and we ask that any reflection thoughts or toasts about Ronnie James Dio that you wish to share be left on our first Memorial posting that can be found HERE. Thank you.

Has it been a year already?

Well yes I guess it has and its probably safe to say that the worlds Metal and Hard Rock fans will forever remember where they were and what they were doing when they first learned that singer Ronnie James Dio had passed away. This comes from the amazing importance that his very being meant to the music community and just how vital he was to its positive growth with not only his music and creativity but also in the way that he carried himself in the public eye. I have yet to meet a Metal head who didn’t love almost everything that Dio stood for. One cannot question this stance because the musician was nothing short of prolific in his body of work and he impressed everyone again and again.

The Metal Republic had already been having a bad year as only a month before Ronnie died we had lost Type O Negative’s Peter Steele.  Recovery had slowly begun from that news but when word was made official about Ronnie being gone there was not a Heavy Metal fan anywhere in the world that didn’t feel a cold numbness taking them over.  For many fans this man was the pre-eminent legend and his being taken from us was a cruel reminder of just how human our idols truly were.   The realization that the same ills that befall us all can even take away those who bring us peace of mind stung like nothing ever felt before.   Of course Ronnie would leave us with an amazing body of work with Rainbow, Dio, Black Sabbath and Heaven & Hell so he would live forever on in our musical mind.  His passing would lead to the formation of a record label by his wife Wendy and through this the Metal world would be able to enjoy historical releases and material never before seen or heard before.
END_OF_DOCUMENT_TOKEN_TO_BE_REPLACED

Sigh. It’s really the only way that I can start a revisit to this amazing concert film which is now not only available on Blu-ray format but also now comes care of Eagle Vision (the video aspect of Eagle Rock Entertainment). The original release came out in 2007 on Rhino Entertainment and was a blockbuster based on its capture of a reunited “Black Sabbath Mark II” lineup that now was touring under the moniker of Heaven And Hell. When Ronnie James Dio passed away in May of 2010 the Metal Realm was shattered by the news and as with all personalities of note, such an event would find both final and unreleased material being delivered to the fans in order to help them remember the joy and happiness the person lost had given them. “Live At Radio City 2007” was not released on Blu-ray format until the Eagle Vision release and since my thoughts about this amazing show have never changed I am re-presenting them for you below. I will then talk a little bit about the differences between this release and the standard edition DVD.
END_OF_DOCUMENT_TOKEN_TO_BE_REPLACED

I can hardly believe the words myself, but yes, the news is indeed true and the Metal world has lost one of its most inspiring titans as Ronnie James Dio, The Godfather Of Heavy has died at age 67.  Back in November of 2009 it was reported that Ronnie had been diagnosed with stomach cancer and he quickly began to get treated for it and according to most reports was on the mend if not a little worse for wear from the treatments.  Sadly, the battle that this brave warrior king would fight would not be all that long and he would succumb to the illness and pass from this plane on Sunday morning 5/16/2010.

The singer was nothing less than an icon and a man who lived, breathed and pretty much existed Heavy Metal music on a daily basis and while he was born Ronald James Padavona back in 1942, it was the name Dio that resonated like a thunderclap across the music geography of the world.

The reunion of the original Black Sabbath members at Ozzfest several years ago was nothing less than historic and of course led to a reunion tour and numerous festival appearances on its own. After it had completed there were many voices in the Metal community speaking aloud and wondering about that other important chapter in the bands history which was the post-Ozzy Mark II lineup referred to as “The Dio Years”. Answers would come in 2005 as those members of Black Sabbath Mark II reunited for a compilation entitled “Black Sabbath The Dio Years” and not only did the release present to us the cream of the crop from their albums together, but it also delivered three new songs that showed the Metal world that a fire was still burning in this particular creative furnace. Fortunately the special nature of the compilation led to a very limited touring run and the band would rename itself “Heaven And Hell” for the course of these shows. It was an obvious homage to the first Sabbath material with Dio on the microphone and to many was a much better idea than calling themselves Black Sabbath. One of the gigs that was done during this brief tour is presented in full on this DVD as the band took over the hallowed Radio City Music Hall and performed a stunning concert for over 8,000 people. The tickets for this event sold out within the hour and if you were a Metal fan and somehow sadly missed the boat on the actual gig, this film does its best to bring you into the venue for a closeup look at how it went down. I am proud to inform you all that I was one of the number inside Radio City and stood glued to my spot as I witnessed Heavy Metal history taking place as they performed together in this configuration for the first time in more than fifteen years.
END_OF_DOCUMENT_TOKEN_TO_BE_REPLACED

Recently On “The Chronicles”